You are here: Home / Disciplining / Every Little Detail on How to Use Positive Reinforcement To Empower Your Child 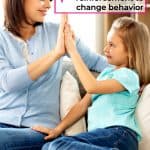 That mom with the great kids… she’s keeping a secret. She may not even know it, but deep inside, she has all the details for using positive reinforcement to change behavior woven throughout her parenting ability.

The secrets disguise themselves as mere intuition. Instincts, she may herself be surprised by.

But these “secret skills” aren’t only available to those with stealth parenting genes. They’re for everyone, so I’m going to share them with you.

The use of positive reinforcement to change behavior is elusive. By calling it out and giving it a name, we increase intentionality in using this child training strategy to benefit our children and families more significantly.

What is Positive Reinforcement

All humans desire to belong, feel needed, and simply seen by those around them.

This is even more true of our children.

The word reinforcement is synonymous with strengthening.

Each time a good behavior is displayed, you “strengthen” that good behavior muscle using positive reinforcement. The opposite is true as well for poor behaviors, but we’ll talk about that later.

In short, positive reinforcement is:

Come back here later to read more about how this works when praising your child. 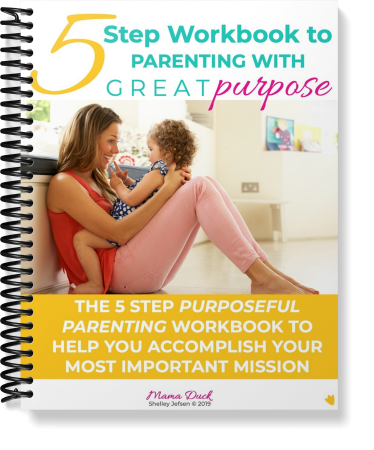 A great example of this occurred when I potty trained my children.

All 4 of them began potty training when they were 21-months-old and were fully potty trained by 24-months-old.

It’s interesting, isn’t it, the acceptable and unacceptable stances society tells a mom she is allowed to take.

“Ain’t no way!” I thought to myself as another mom changed her four-and-a-half-year old’s poopy diaper in the nursing mother’s room. “Maybe it’ll work or maybe it won’t but I’m determined to have my children potty trained by two.”

Of course, I didn’t say so. I could never share how I felt (about this or any other parenting goal) out loud. Doing so might rub someone the wrong way.

I have two boys and two girls. One of whom has a few sensory challenges, another strong-willed by nature, another reserved and sensitive.

I’m confident one of the main reasons all four of them were potty trained by the age of two was my use of extravagant positive reinforcement.

I did use some tangible reinforcements, such as tiny pieces of candy, from time to time, but more than anything else, the positive reinforcement I used the most while potty training was simple voice and behavior.

This is the positive reinforcements I spy moms use the most.

She’s playing in an indoor play area when her child shares his toy with another child.

Her face beaming with approval, she says in an excited, happy, cheerful voice:

“AWE SWEETIE! THAT IS SUUCCHH A GOOD BOY! THANK YOU SOOO MUCH FOR DOING WHAT YOU DID! I KNOW THAT CHILD MUST FEEL REALLY SPECIAL SINCE YOU SHARED WITH HIM!!”

Children adore accolades almost as much as they like ketchup.

Think of it as the positive reinforcement secret sauce for transforming behavior.

A child’s instincts will tug at him to get a repeated reaction out of mom.

Additionally, the child will have learned valuable training with regard to the importance of making others feel special!

When your child does something fantastic – Do you get all excited?

Scoop him up in your arms and vow no woman will ever be good enough for him?

Generous positive reinforcement will reap a harvest over and over.

If that’s not you, ask yourself why.

Are you just not excitable, loud, or cheery?

However, when my children display fantastic behavior I know will benefit their lives, I want them to KNOW I see them.

And I want them to perpetuate the behavior.

So I use the happiest, most boisterous, loudest, cheeriest positive reinforcement I can because it’s not about me or my preferences… it’s about the kids!

The words you say and the way you say them are not the only way to use positive reinforcement to change behavior.

Although, I do believe they are among the most powerful!

“Power of life and death lives within the tongue!”

Another way of looking at positive reinforcement is through the element of rewards.

Going back to the potty training example I shared above, while potty training, I also sporadically offered a small treat as a positive reinforcement reward for using the toilet.

Now, when I say small treat… I mean small!

I kept a Tupperware container of MnM’s in the sink cabinet, and when my child would use the toilet, he got a single MnM!

Throughout the course of the day, he gobbled up 8-10 MnM’s.

You know how small an MnM is, right?

A tiny little blip. Nothing. But… it meant everything to him.

We don’t eat a lot of sweets or give treats out willy-nilly, so for my child, one single MnM was a huge reward!

With this in mind, here is a list of other practical ideas for how to use positive reinforcement to change behavior.

🌟 1. One MnM each time you pee or poop in the potty. (Covered above – had to repeat it here because it’s so darn great!)

🌟 2. One minute extra of staying up with mom and dad after bedtime for every night first-time bedtime obedience is shown.

🌟 3. Ten minutes of extra TV time every time the TV (or any electronic) is turned off immediately and without argument.

🌟 4. Choosing the movie on the next family movie night when you let someone else choose this movie night.

🌟 5. $5 Extra to spend during parent-child date when you share generously for an entire week.

🌟 6. One extra story or book at bedtime when a room is cleaned up the first time told.

🌟 7. 15 Minutes of reading time before lights out after a day of no arguing. (Geared toward older children.)

🌟 8. I’ll do one chore for you for every two you do for a sibling who’s sick.

🌟 11. 10 Extra minutes of alone time playing with mom for allowing mom 20 minutes of undisturbed relaxing time in her room.

🌟 12. One minute of extra electronic time for every one time you sing the ABC song to your brother to help him learn it. (Taken from my own family currently teaching our youngest his letters.:)

🌟 13. 15 Minutes of phone time to call a friend. (This works for us because we do not allow our children to have cell phones and instead have a landline they can call friends on.)

🌟 15. Choosing next week’s treat-day sweet when you don’t complain about not having sweets this week.

These 15 examples of how to use positive reinforcement to change behavior is not an exhaustive list.

You can come up with dozens more.

What I want you to see in the list above is how each positive reinforcement is tethered to a positive (or good) behavior you want your child to repeat.

This is how positive reinforcement changes, modifies and shapes behavior for the better.

Alternately, when a grateful and humble environment is cultivated, almost anything can be a reward and, therefore, a positive reinforcement.

Good behavior (words and actions you WANT your child to repeat) = positive outcome.

Poor behavior (words and actions you want your child to STOP) = negative outcomes.

Think it sounds too simple?

The concept is simple.

But simple is different than easy.

Furthermore, it won’t be effective at all as a concept.

Only through consistent and complete follow-through and implementation (action) will you see long-lasting and astoundingly positive results!

Using positive reinforcement in this way requires intention and forethought.

For rewarding your child with fruit snacks to be effective, they have to be a rare commodity.

I use this positive reinforcement in our home. Fruit snacks are not a regular snack here.

They aren’t a “snack” at all. They’re gelatin and sugar.

As such, they’re only earned at the end of our homeschool day by completing all work with a good attitude.

And the kids love it!

Likewise, children without a predictable and firm bedtime, won’t be impressed by the prospect of 10 extra minutes up.

Accentuate the Positive – Ignore the Negative

Ignoring the negative when it comes to positive reinforcement can be challenging for short-tempered moms.

It can be effective, though.

So I want to give you one quick example of how to do this in case you are facing a behavior situation where this may be applicable.

Sometimes a behavior isn’t altogether deserving of a consequence, is difficult to change through positive reinforcement, yet plucks at your nerves like de-feathering a chicken.

An example would be a little tike overusing the word poop!

Unfortunately, what ends up happening is a child gets a laugh from mom, dad, or a sibling when he tells a joke about poop, then all the sudden poop is ALL he talks about!

Consequence or punishment isn’t necessary for this.

Come back here later to read how to come up with effective consequences for your child.

Additionally, it’ll be difficult for him to break this habit through positive reinforcement, because it will require him to remember NOT to say poop all day long.

Remembering NOT to say poop is more difficult than remembering TO say a pretty word.

Instead; you can accentuate the positive and eliminate the negative.

If you’re trying to break a bad habit your child has formed, similar to the poop obsession; make a big deal with praise when he says a joke about fish, dinosaurs, or billy goats.

Then when he says a joke about poop;

Turn and walk away.

Spend roughly 5 minutes away from the child. Then return to talk about something unrelated to poop.

He wants a reaction.

The bad habit of perpetual poop jokes began after getting a reaction the child enjoyed. Deny him a reaction and he’ll abandon poop talk.

Give him a strong positive reaction to pleasant words and you’ll see those words replace the undesirable.

You can see how this takes calm, consistent, and stoic parenting to accomplish.

Get good at this strategy.

It will serve you well.

No Limits to Using Positive Reinforcement to Change Behavior!

I am a proponent and fan of positive reinforcement. Advocates of positive parenting reference this concept a lot for behavior improvements.

What’s important to understand is; to be successful in using positive reinforcement to change behavior, there must be an opposite truth.

Sometimes, it’s turning a blind eye and walking away.

Typically, though, for positive reinforcement to work, the reward must be withheld without some sort of positive behavior to earn it.

In short, the real secret is that everything is a privilege to be earned.

If necessary, take steps to reset the dynamic of entitlement first, then watch how fantastic positive reinforcement strategy can impact your parenting.

When mastered, no limits remain to the great habits and behaviors you can train!

I'm a stay-at-home/work-at-home, homeschooling Mama of 4 beautiful kiddos, wife to Jay, AACC Certified Parenting Coach, Speaker, and Writer. I adore the sound of my children's giggles, that first sip of hot coffee, and a snuggly blanket fresh out of the dryer. Here on Faithful Parenting, my heart is to equip the mamas who treasure motherhood with the knowledge and skills to raise fantastic kids and build a tethered family! 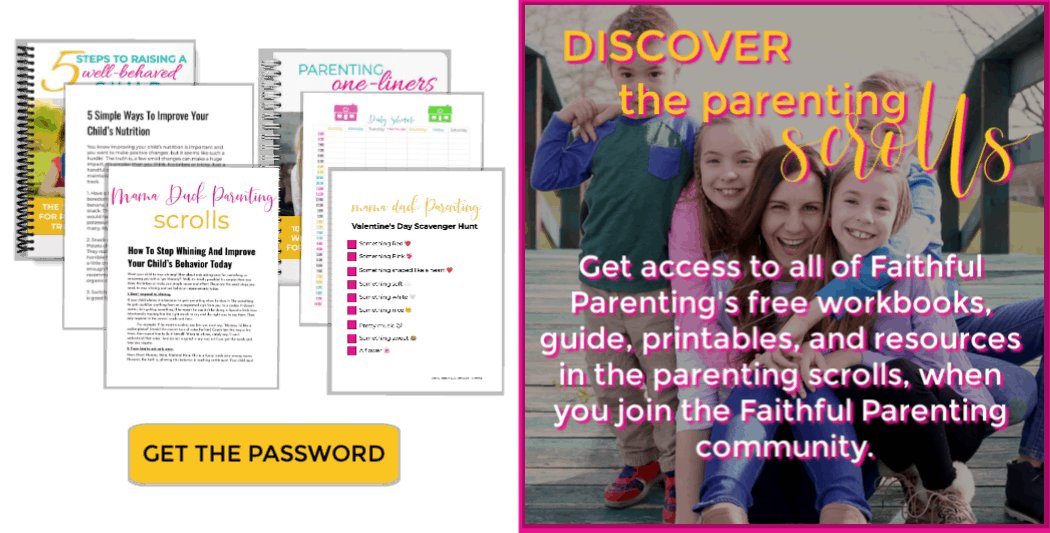 Thanks for scrolling all the way to the bottom! I’m honored you’re here. Want to learn more about the Faithful Parenting difference? Click here.

We use cookies to ensure the best experience on our website. If you continue to use this site we'll assume you're OK with that.Got itFull Policy